Get fresh music recommendations delivered to your inbox every Friday.
We've updated our Terms of Use. You can review the changes here.

from We Sang Every Day by Avem 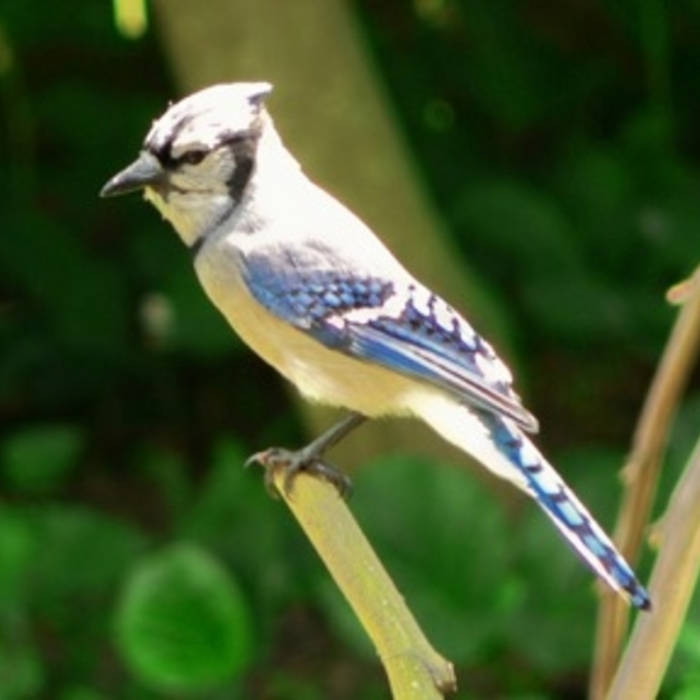 First release from these Bird Nerd punk rockers from the idyllic Ontario countryside. Sing along and enjoy this straight up pop-punk tune!

One of the loudest and most colourful birds of eastern back yards and woodlots, the Blue Jay is unmistakable. Intelligent and adaptable, it may feed on almost anything, and it is quick to take advantage of bird feeders. Besides their raucous jay! jay! calls, Blue Jays make a variety of musical sounds, and they can do a remarkable imitation of the scream of a Red-shouldered Hawk. Not always conspicuous, they slip furtively through the trees when tending their own nest or going to rob the nest of another bird. *

One of our most popular birds, the Cardinal is the official state bird of no fewer than seven eastern states. Abundant in the Southeast, it has been extending its range northward for decades, and it now brightens winter days with its colour and its whistled song as far north as southeastern Canada. Feeders stocked with sunflower seeds may have aided its northward spread. West of the Great Plains, the Cardinal is mostly absent, but it is locally common in the desert Southwest. *

One of the world's fastest birds; in power-diving from great heights to strike prey, the Peregrine may possibly reach 200 miles per hour. Regarded by falconers and biologists alike as one of the noblest and most spectacular of all birds of prey. Although it is found on six continents, the Peregrine is uncommon in most areas; it was seriously endangered in the mid-20th century because of the effects of DDT and other persistent pesticides. *

Often regarded as a pest, the Starling wins our grudging admiration for its adaptability, toughness, and seeming intelligence. Brought to North America in 1890, it has spread to occupy most of the continent, and is now abundant in many areas. Sociable at most seasons, Starlings may gather in immense flocks in fall and winter. When the flocks break up for the breeding season, males reveal a skill for mimicry, interrupting their wheezing and sputtering songs with perfect imitations of other birds. *

A very familiar bird over most of North America, running and hopping on lawns with upright stance, often nesting on porches and windowsills. The Robin's rich caroling is among the earliest bird songs heard at dawn in spring and summer, often beginning just before first light. In fall and winter, robins may gather by the hundreds in roaming flocks, concentrating at sources of food. *

Often the most common and widespread gull in North America, especially inland, and numbers are probably still increasing. Sociable at all seasons; concentrations at nesting colonies or at winter feeding sites may run into the tens of thousands. The Ring-bill has adapted thoroughly to civilization. Flocks are often seen resting in parking lots, scavenging scraps around fast-food restaurants, or swarming over landfills. *

Few birds have been associated with humans so closely as the Rock Pigeon, better known as the common city pigeon. It has been domesticated and taken around the world, raised for food (GROSS), trained for homing, racing, and carrying messages, and used in research. Originally native from Europe to North Africa and India, it now lives in a wild or semi-wild condition in cities all over the world, including most of North America. In places it has reverted to wild habits, nesting on cliffs far from cities. *

from We Sang Every Day, track released May 15, 2018
Engineered/Mixed/Mastered by Adam Newcomb @ Newcomb Studios. (www.newcombstudios.ca)

Ramonescore Bird Nerds from the Idyllic Countryside of Southern Ontario.